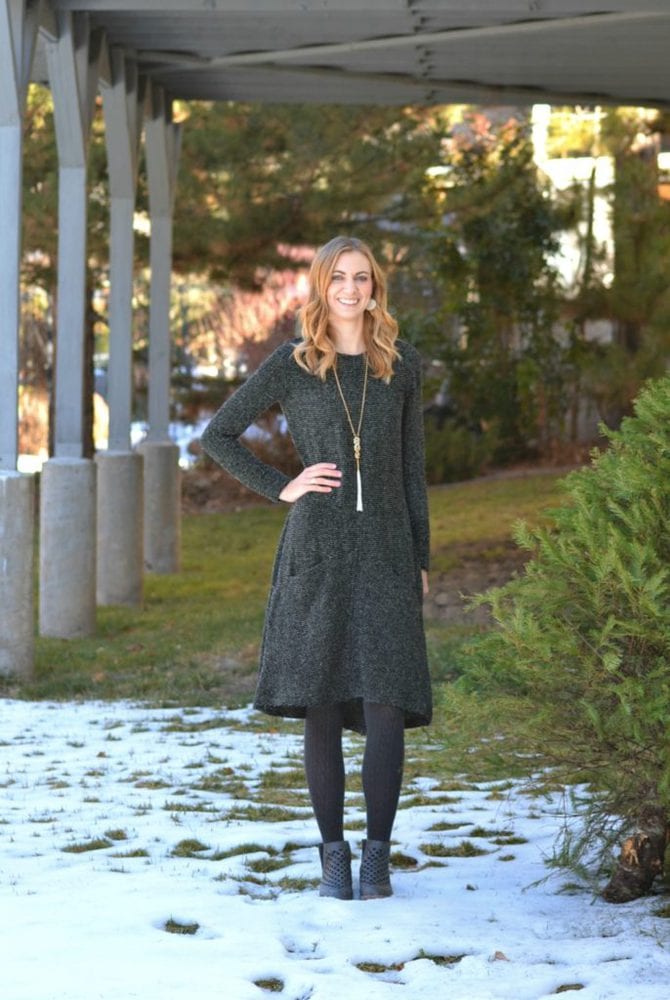 For the past several winters I’ve been either pregnant or nursing meaning I have a lot of wardrobe holes in my winter wardrobe. I’ve been good at filling in sweatshirts, cardigans, and jeans, but not my winter dresses and skirts. It has been awhile since I made a dress or a skirt for myself and my winter dressy wardrobe was lacking. I got some striped fabric from Sewing Studio and knew it would make the perfect warm, winter dress. I had a hard time deciding on a pattern but eventually chose the Farrow Dress. I didn’t realize I would love a striped boucle Farrow Dress so much! *I was given the fabric to review for free. All opinions are my own.* 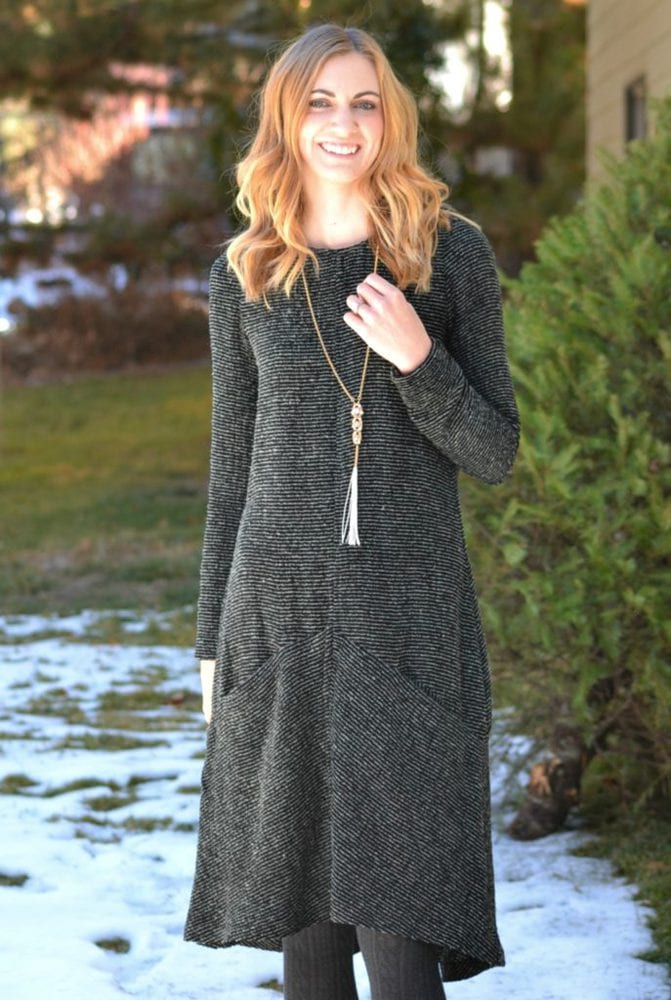 I was contacted by Karleen from the Sewing Studio for a collaboration. She recently acquired Sewing Studio after the previous owner lost her battle against cancer. Karleen is still in her first year and learning lots of new things. I had some questions to ask Karleen about her fabric, and she has the best customer service. I could tell she cared about me and if I would be successful in my sewing project. She has lots and lots of apparel fabrics, and there are always good sales going on! Use the code “HEATHER” to get 20% off your next order!

Initially I ordered the fabric because I thought it was a striped sweater knit, and I wanted to make a knit winter dress. When it came I realized it was a striped boucle coat weight fabric with lots of drape. (This is not the fault of Karleen, it was sold that way before she took over.) It’s a gorgeous fabric and from far away it really looks like sweater fabric. I couldn’t go with my initial plan so I started searching for warm woven dress inspiration. I really struggled finding anything I liked because most winter dresses are above the knee, backless, or sleeveless. How would that keep your warm if you’re not fully covered? I asked on instagram for some helped and had a couple of people suggest the Farrow Dress which is knee length and has long sleeves. Luckily, Nicole from Merritts Makes let me borrow her paper version of the Farrow Dress so I didn’t have to tape it all together. If you are sewing stripes this is how to match stripes. 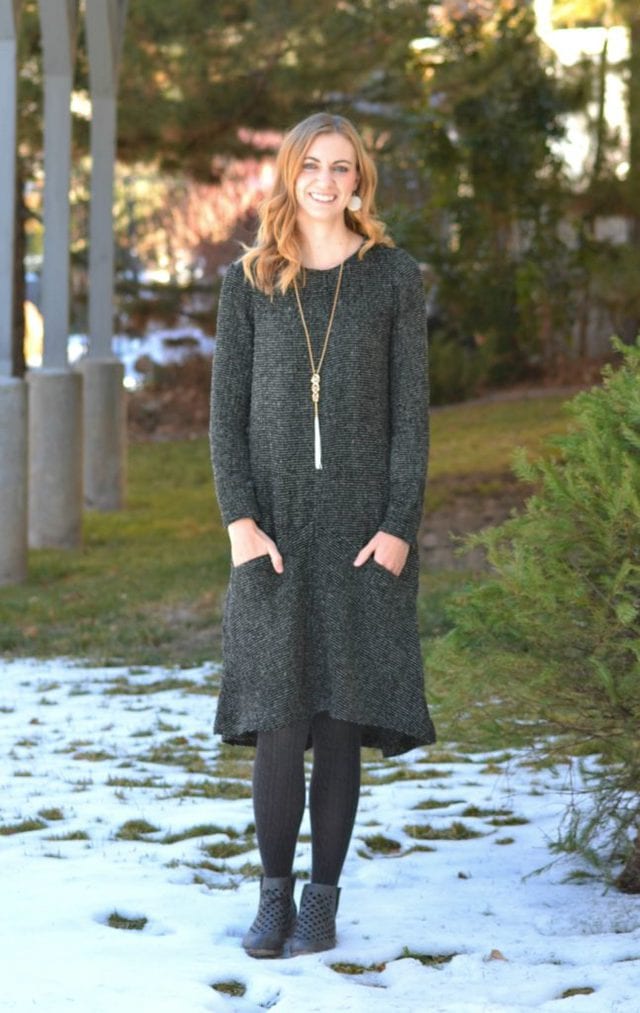 I chose a size 2 based on my measurements. I struggle with Grainline Studio patterns because the other ones I’ve tried had a pretty good amount of ease and I have to size down. I was between sizes, and Nicole suggested sizing up because the shoulders are tight. I’m glad I did because the shoulders and arms are super fitted. It’s borderline too tight, but it’s still wearable. I dropped the opening in the back and that helped give me just enough room to make it barely comfortable.

I’m taller than the pattern, and I wanted to dress to hit the top of my knees so I lengthened at the waist lengthen/shorten line 6 whole inches. I didn’t think about how that much length would drop the pockets so much or change the flare so drastically. It make the flare less and the middle of the dress looked like a column instead of an a-line. While I was working on it and trying it on during the process, I decided to take the waist in. It changes the shape and the look of the pattern, but I’m much happier with the result. I also added 3 inches to the sleeves to make them long enough.

If I make the dress again, then I’ll drop the front neckline. I feel like it’s high and almost uncomfortable. Overall I’m happy with the fit and style. I love that it has pockets, and I love the subtle hi-lo hem. I love that the hem is a little wavy because it was cut on the bias and stretched a little while being hemmed. 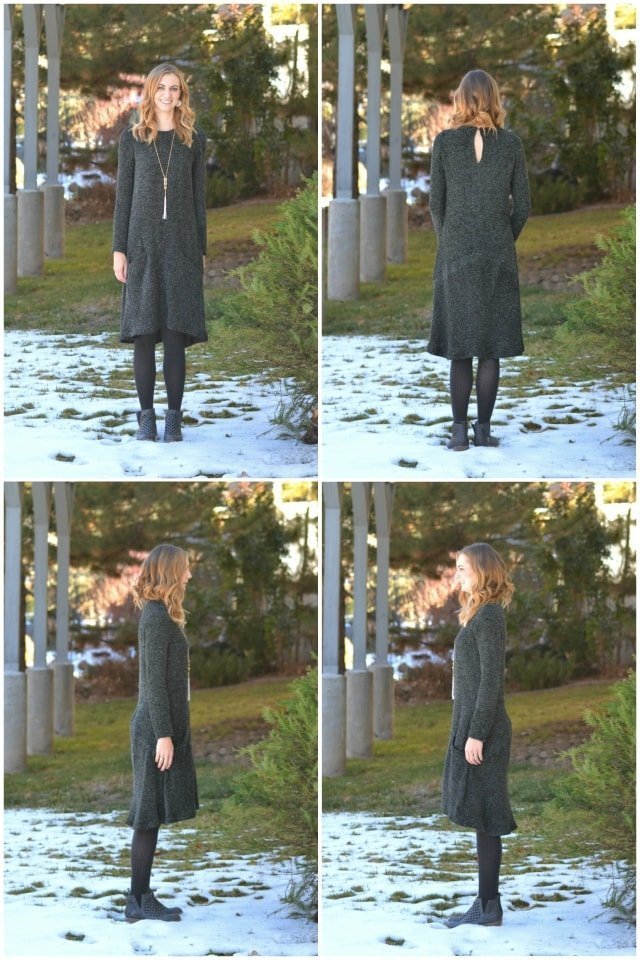 The fabric was really easy to work with. It frayed pretty easily but it’s like each stripe is made of a fluffy yarn. It wasn’t like a bunch of threads fraying, it was like some fluffy yarn could be pulled out. I did my best with stripe matching when I cut it out, but the stripes are so small I didn’t worry about it too much when I sewed it up. I wanted some contrasting with the stripes and it worked out nicely in the front. The stripes didn’t work as well in the back; I should have done perpendicular stripes. It still contrasts enough to look good.

Since I had to stripe match I was a little short on fabric. I cut the pocket part off of the pattern and placed it crosswise to be able to fit it all in. It worked out great, but it made the seams around the pockets extra bulky especially since I was using a thicker fabric. While I was sewing up the dress I sewed one side of the pockets wrong (there’s no right side and wrong side to the fabric), and this fabric is so fluffy that it’s impossible to seam rip. I couldn’t see the sewing thread in between the yarn. I just cut where I sewed it wrong and resewed it correctly. It just made one pocket slightly smaller than the other. 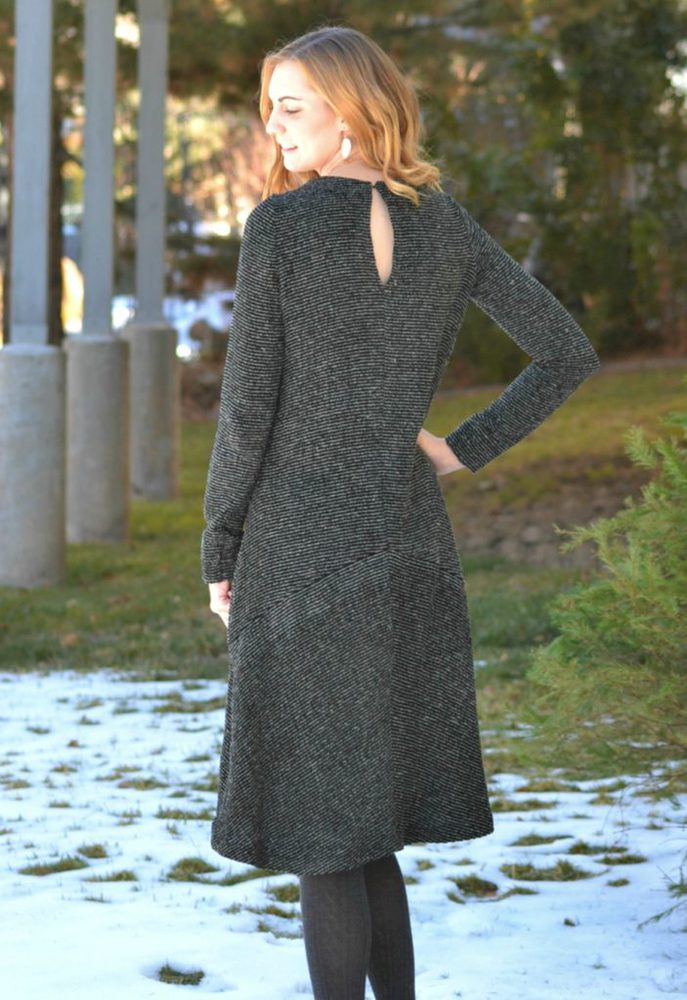 The dress is really warm and exactly what I was looking for. It’s a dress that’s warm because it actually covers me. I love that from far away it reads as a solid and close up you can see the stripes and texture. I love that it looks like a sweater, and I love the keyhole detail. My favorite way to wear it is with my fur vest I made a couple of years ago. The colors blend together, there’s lots of texture and interest, and it’s really warm. I’m happy with my striped boucle Farrow Dress! 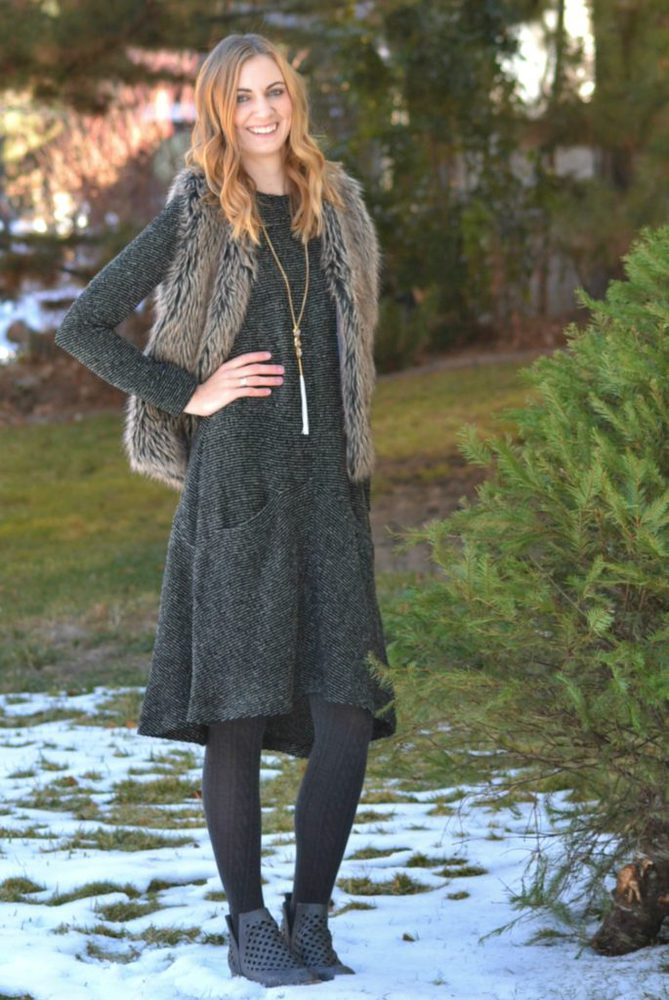 Harbor Knot Sweater
Sew a Robe Without a Sewing Pattern
How to Add Fringe to a Top
Previous Post: « How to Sew Curves: Clipping v Notching
Next Post: Three Ways to Seam Rip »